A few notes about this week's charters... 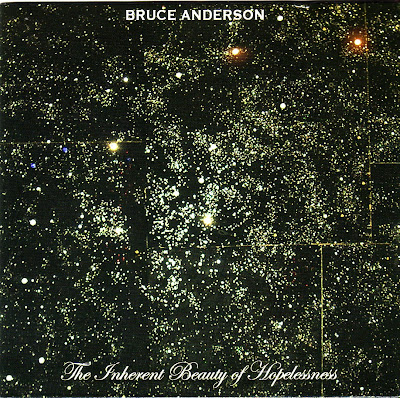 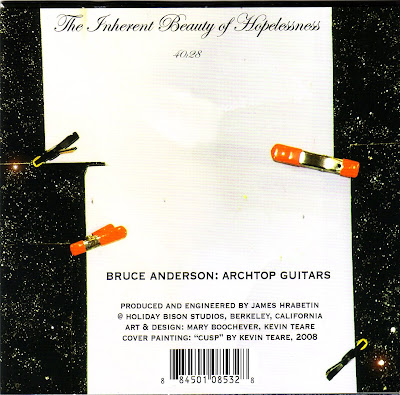 Bruce Anderson's 'The Inherent Beauty of Hopelessness' arrived in the mail while I was away. No record company listed, hardly any credits and impossible to find online. It's not listed on the MX-80 site or available at iTunes or Amazon. It is, however, as good as anything I've heard this decade. I thought of editing it down into sections for airplay, but in the end just couldn't bring myself to cut anything. It's a long piece (40' 28") so when it comes on, do yourself a favour; stop what you're doing and let it take you over. You'll thank me later.

Stephen Bruton's 'Fading Man' is another sublime work reminiscent of The Band at their very best. I've been a fan of Stephen's since his last album showed up, unsolicited, courtesy ace promo-dude and southern gent, Jeff Cook. Since then, all his solo albums and his Austin 'super' group, The Resentments have been playlisted regularly here.

Black Joe Lewis was an impulse buy one afternoon at the awful Borders in Riverhead. I'd never heard of him but it looked good and it was on Lost Highway. Turns out the album's fantastic, and this is the second of many tracks we're going to feature over the coming weeks.

I remember Charlie Gillett playing TG Sheppard's 'Trying To Beat The Morning Home' back in the mid 70's on his Honky Tonk radio show and it just might have been the first country single I ever bought. When I heard a friend was working with TG now and that his new album contained duets with the likes of George Jones, Jerry Lee Lewis, Delbert McClinton and others, well...it's a no-brainer, really.

Johnny Throttle is good ol' punk-rock done proper, like it was '75/'76. Drums, bass, guitar, voice. Featuring the irrepressible Afonso (late of The Parkinsons) on 'voice', Tom Phobic and I caught them in a crummy dive just off New Bond Street and we had a blast. I was worried I'm getting too old for this. Apparently I'm not.

Also, while in London, I wanted to meet Rupert Orton, one of the guys behind NoFoSo fave The Jim Jones Revue, so I stumbled into the sticky heat-trap that is the 100 Club during a Bob Log III show to find Rupert was promoting the show for Not The Same Old Blues Crap. Between mixing the sound and collecting the money, he told me that after the JJR establish a foothold in Italy and the Benelux territories (having already made solid impressions in France, Spain, Scandinavia and the UK), there will be a short US tour taking in Boston, NYC, Philly, DC and hopefully a few other places. ALL my friends who've seen the band rate 'em highly, so this is something to look forward to. Meanwhile one-man-band, Bob Log III is hysterical. He drank nearly a bottle's worth of tequila shots during his set, played one song with a girl sitting on each leg and played filthy, raw slide blues to a hugely appreciative audience. 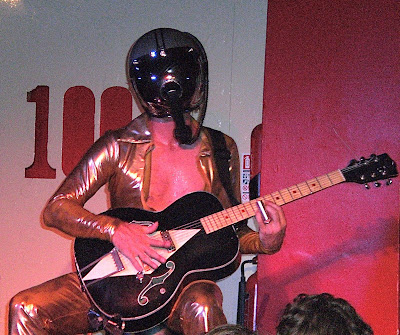 Howard, I caught Bob Log III two days earlier in Canterbury. Given the sweat he works up I'm amazed to see that he was still wearing the same jump suit. Or can there possibly be more than one gold vinyl jump suit in this world? He is truly a sight to behold and a wonder to hear.

If you ever come across the 45 Hussy Bowler that he made when he was in Doo Rag grab it with both hands and never let go. Why? Because they sound like Howlin' Wolf singing out of a cave on Mars.

For my money JJR are the living spirit of the Flamin' Groovies circa '72. Yeah, that good . . . Best, Peter

welcome back Peter! Jeez. I had a Doo Rag single once. I don't know which one. It sounded like someone used a drainpipe as a microphone.
People: Never under ANY circumstances think you can afford to ditch ANY part of your collection just because it's a pain in the arse to move it to a different part of the world. The records I think I'll never want again are always exactly the ones I want right now.
I haven't had the opp to see JRR yet, but I have a feeling they're a saving grace.

Howard, I think Doo Rag used a vacuum cleaner hose to sing through and a cardboard box to beat time with. But I wouldn't bet against there being a length of drainpipe somewhere in the mix. They made three totally essential 45s for In the Red, Drunken Fish and Westworld labels. This is where the blues meets domestic appliances, and your living room is never the same again . . . Let me know if you want a cd of these. There's a couple of lps and and ep out there too, but it's the 45s that count.