The 7” B-side:
The Star Spangles: The Sins Of A Family Fall On The Daughter 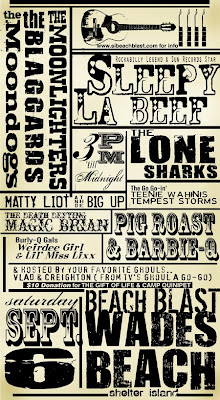 s'nice that ramsey lewis made it on the list. that was such a great record, one of those that really captured the times. an instrumental could never b a hit 2day.

well, I have 3 versions of WITW coming this week, ALL fabulous! Harvey Mandel and The Graham Bond Organization are the others. Then there's always Wade INTO the Water by Alabama 3...

Love the theme HT, how about Pipeline or Wipeout by Johnny Thunders?
I am the sea by the Who?
His last summer by The Barracudas?
Submission by the pistols (caught them last night at the hammersmith Apollo - seems to be an expanding waistline competitition and Jones is winning!OK thats my lot and i wont mention the football if you don't!
tpx

great to hear from you, T. I'm still unpacking my cds and haven't got the JT yet, but I'll publish the full playlist at the end of the week. Hopefully, you'll approve of most of the other stuff. The Pistols are STILL at it? Blimey...any new songs? - ht

This here is a nice site. Mississippi John and this strange man named Unclesamurai are fans of your site. Keep up the good work young man

thank you. I used to hear Son House on John Peel's radio show in the UK. He played him quite frequently. In fact, now I think about it, I got much more into the blues since hearing those tracks on Peel back in the late 60s. ht

H - Naw,no new songs from the pistols (or us for that matter)but they did do hawkwind's silver machine.
I forgot to add the song "Beach Boy" from my first combo Bad Karma Beckons. Unfortunately not on cd (we are working on a retrospective one day tho)so no means of getting it to you. Great first line tho "surfing time is here again the surf boards' mightier than the pen.........tpx

it's about time there was some 'new' stuff outa The Phobics. Any sign? I can only play the Down And Out In Deptford ep so many times before the listeners revolt in drove!
When the BKB's ready, pls send.