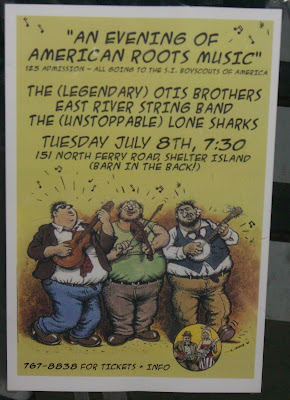 Tuesday, Smugglin' Johnny C and I witnessed a stellar evening of American roots music on Shelter Island at Joe Lauro's spectacular Pleasure Lounge. Located in a barn behind his house, it's the coolest place on the island, hands down. Ancient posters featuring the Ventures, Pigmeat Markham, the Carter Sisters, Bill Black's Combo, Johnny Horton, and Ernie K-Doe 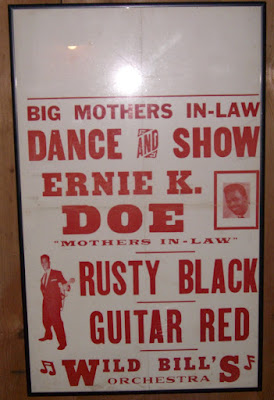 shared wall space with beer-bottle caps, old license plates, photos of Fats Domino and Robert Johnson, Nat King Cole and Johnny Cash album covers and even a Max Bialystock office plaque prop from "The Producers", fer heaven's sake! The place is genius, and now I want my own barn. Tonight's poster had been designed by Robert Crumb and everything was aligned for the evening to be a bit special. It was. I'd not heard the East River String Band before but it wasn't long before John (guitar, voice) and Eden (ukelele, voice) were treating us to some 20s & 30s folk-blues songs culled from John's enormous collection of 78s. Tunes like Skip James' 'Crow Jane', Memphis Minnie's 'My Chauffeur', Charlie Patton's 'Screamin' & Hollerin'', Mississippi John Hurt's 'Ain't No Tellin'' & Blind Lemon Jefferson's 'One Dime Blues' should give you an idea of what they're about. Oh, and let's not leave out Pigmeat Pete and Catjuice Charlie's 'On Our Turpentine Farm' either. Robert Crumb joined 'em to strum some mandolin, then the Sharks' Joe Lauro (upright bass) and Andy Burton (accordion) and the Otis Brothers (Bob Guida, guitar & Pat Conte, banjo, fiddle) stepped up to fill out the sound beautifully and suddenly the night got magic. I hadn't planned to film the gig - if anything, maybe a tune or two by the Sharks or get a Crumb ID, but I used up most of my tape because this seemed like it had to be documented, however haphazardly (no tripod, and filmed from the the balcony on the right). They were fantastic and I hope Joe brings 'em back soon. I've not yet had the good fortune to experience one of Levon Helm's Midnight Rambles, but I'd bet the vibe is exactly the same.

As the Otis Bros got ready for their own set, I ran into John & Eden out back and they were generous enough to give me a copy of their album (on cd AND vinyl). I promised them a dvd of the footage I shot and. They did an ID for NoFoSo, and I asked John if he thought Mr. Crumb might do the same but he told me that Robert didn't like cameras, or doing 'that sort of thing'. I know he's kind of reclusive, so I thought 'fair enough' and gave him some space....which he used admirably by being given a piggy-back ride out behind the barn by a spunky young lass in a polka dot dress who obviously knew about some of his predilections. The Otis Brothers are two guys from Queens and all I'd heard about them was they (too) collected 78 rpm records. Everybody here seemed to have huge 78rpm collections! I'm not sure how the OB's like to be described, but country blues with a spiritual edge might not be too far off. Thoughts of Mississippi juke joints surfaced and by the time they did Paul 'Wine' Jones' "Pucker Up, Buttercup" they had the audience in their hands.
After a short break, the Lone Sharks hit the stage, blasted into "The In-Crowd" and tore the place apart. Now I'm up to 7 Sharks sightings, and this was by far the best. GREAT versions of Johnny 'Burnette's Tear It Up', Bo Diddley's 'Dearest Darling', and their own 'Bad Baby' and the catchy 'Gone Hollywood' from the new alb went by in a flash and next thing I knew, we had to catch the last ferry. It was a drag leaving but neither of us felt like driving the extra 50 miles, so we put blasted Johnny's newly acquired Otis Brothers cd and set off. On the ferry, Johnny saw Pat Conte up front, so we went to pay our respects and Pat told us he had 50,000 78s in his basement and once had a radio show - The Secret Museum - on WBAI and WFMU. He was fascinating, telling us about 78s he had from all over the world. Who knew they made 78s in Africa? Or knows about Albert Richardson who recorded in the late 20's on Britain's Zonophone label? I sure didn't. Graciously, he did an ID for the station and then the ferry pulled into Greenport. I could have used another couple of hours with him. A perfect night. 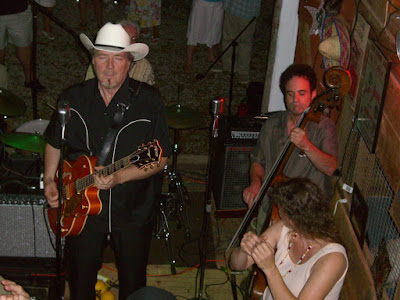 cmon over baby we got kickin' in the barn who's barn what barn YOUR barn!
hell yes u need one of your own. it's the logical next phase.

shouldn't that be "chicken in the barn"?! I just drove home from the city blasting a Wreckless Eric at the BBC cd I just picked up at Virgin. On it, there's a track called Sign Of The Chicken that blew me away, so there'll be a bunch of Wreckless on the wradio over the next few weeks. He's got a new one with Amy Rigby (Wrigby now they're married, perhaps?) so watch out for it. Thanks for writin' in. On deck: Homeboy

ya know, i thought it was chicken but just2dbl chek myself i went2several song lyrics sites and all of them said "kickin'". i shoulda trusted myself on that one. i played that single hundreds of times when it came out,and i always wondered what 'chicken in the barn' meant. fried chicken? a sneaky sex reference? a live chicken? (afterall, it WAS a barn). and btw gimme shleter island is a brilliant title.