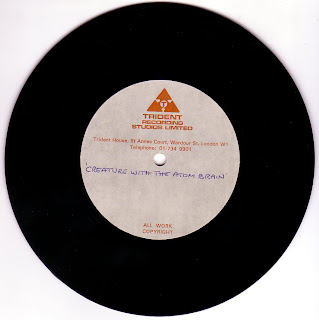 Roky Erickson & The Aliens
'Creature With The Atom Brain' - acetate 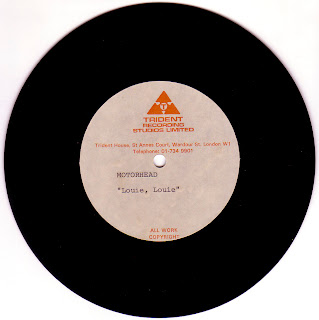 L.A. rock legend Kim Fowley booked a session once, arriving with a gorgeous young girl with long, shiny black hair who he introduced as “dog meat”. She sat next to him and didn’t say a word while he took off his shoes and proceeded to pick at the skin between his toes during our session. Despite this, I found him to be a highly entertaining individual. He claimed to have a photographic memory, knew everybody and had great stories about them all. The Stones, the Beatles, the Monkees, the Byrds, Frank Zappa, Gene Vincent were all grist for his mill. A few years later, while at Island Records, an (unsolicited) telex came through with some of his lyrics on it for Eddie & The Hot Rods to consider recording. 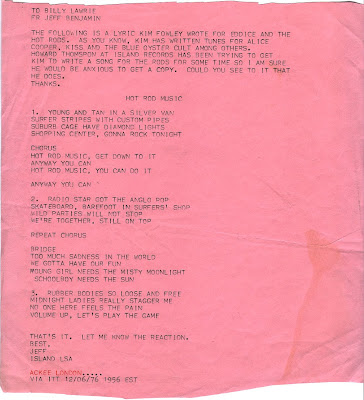 Kim’s still very active and has a show well worth checking out at weekends on Little Steven’s Underground Garage station on the Sirius satellite network.
So while I built up a small business in the copy room, next door, Bob and Ray were establishing themselves as two of the county’s top disc-cutting engineers. Their main competition was George ‘Porky’ Peckham (formerly of the Fourmost) who’d developed quite a reputation at Apple Corps and was soon to open up under his own banner at The Master Room. In the early 70’s, I’d say all the best records released in the UK had their parts cut by Bob, Ray or George. Back in the old days (BCd), the final stage of a recording’s creative life took place in a disc cutting room. Here, artists, producers, engineers, record companies would bring their ¼” master tapes (stereo or mono) to be turned into acetates for reference purposes or master lacquers for manufacturing purposes. Reference acetates, if handled carefully, could be played back up to nearly a dozen times before they’d start to lose quality. Clients would ‘tweak’ the sound for the last time as it was played back on our Studer A-80 using limiters, compression and EQ’ing the (overall) sound until it sounded exactly the way they wanted. Then that signal would be fed into the diamond stylus on the cutting head of our Neumann lathe.

(Thanks to Steve Caraco at the incredible www.Madonnacatalog.com site for allowing me to borrow his 'acetate' page for a picture of the lathe and a more detailed explanation of the process. Interesting to see a Madonna acetate for 'Lucky Star' cut at Trident there, too) 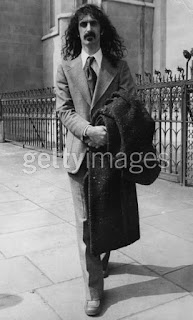 and the print that appeared in Sounds magazine had me lurking in the background on the left, but Getty Images have seen fit to crop me out of it for some unknown reason, ha!
There was only one day when I wished I didn’t have to go to work, May 5th 1973. Normally, we didn’t work Saturdays but we got a booking and it wasn’t important enough for Bob or Ray to come in for. I begged and pleaded not to have to work that day, but I was told that if I didn’t go in, I shouldn't come in the following Monday, or ever, and that was that. That was the day the team I'd supported since I was 7, Sunderland, played Leeds Utd in the FA Cup. Sunderland hadn’t even been in a final since 1937 and it was likely they’d never be in one again during my lifetime. There was nothing I could do. Leeds were the strong favourites, so maybe working would spare me the disappointment of a Wembley loss . Suffice to say, the session went ahead (I'm fairly sure it was a session with Duffy Power’s producer, Adrian Miller) and as soon as it was finished, I rushed downstairs to the Ship, the pub next door on Wardour Street, to find a handful of Sunderland fans drinking, singing and crying tears of joy over their 1-0 victory, thanks to an Ian Porterfield goal. I watched it on Match Of The Day later that night, but it felt like I'd won the Grand National but lost the betting ticket.
Favourite sessions often involved working with Ray on David Bowie's "Rebel Rebel" or Bob when Marc Bolan came by. We did 'Metal Guru'(or maybe it was 'Telegram Sam') and Marc insisted on having his picture taken with me. I have no idea why he made a point of that, but I wish I had that picture now.
In '74, Trident was the happening place. The studio was one of the best in the country. The disc cutting room was constantly busy. Trident had started manufacturing a line of recording consoles/mixing desks under the supervision of ex-engineer, Malcolm Toft, while the preview theater on the 2nd floor was screening independent films like Andy Warhol’s 'Trash' and 'Heat' and more mainstream fair like 'The Exorcist' for UK distributors. Trident Audio Productions, had brought in an American, Jack Nelson, to steer its artists (Queen, Headstone and Eugene Wallace) through their new licensing agreement with EMI and things were beginning to look pretty good all round. As fun as it was, I was beginning to feel my future was not in disc-cutting. I wasn’t technically inclined and didn’t want to know how something worked, just that there was someone around who did. I applied for a transfer into Jack Nelson’s department to see whether management might have some appeal. Jack told me to be on the look out for something we might want to pick up for representation. Looking back, I don't think they were terribly serious about my role there but I threw myself into 'talent-scouting' as long as it didn't cost me any money (I wasn't on expenses and my salary was still crappy) and I could still get the last bus/tube back to Willesden Green, where I was living with an old schoolmate and a fellow who played bass with (John Peel discovery) Principal Edwards Magic Theatre. His name was, and probably still is, Joe Read, whose mother's flat in Uppingham had previously been a refuge for a few of us dodgy students to go and smoke hash, pretend we were groovy and drink sherry. I digress.
I saw an act called Supercharge (out of Liverpool), and I’m reasonably sure I caught Cado Belle, Upstairs at Ronnie Scott’s but just as I was getting my feet wet (about 4 weeks in), I got called into Jack’s office and was told Queen had split for John Reid's management company and that Trident Audio Productions was scaling down...see ya…bye! 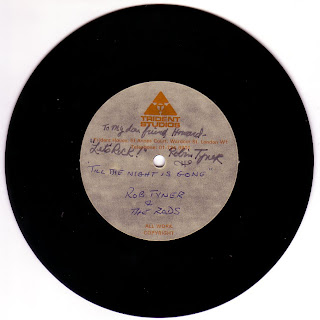 Howard, that was truly wonderful, great stories, particularly liked the bits about the Stooges and the Groovies. Your tale about cropping out the mainline refs in Slow Death had me running to my stack of 45s.Call me Mr. Anal, but I can tell you that the release version of SD runs at 4.15 and the promo at 3.25, so you hacked out 50 seconds from this masterpiece -- sacrilege, indeed! But you've misremembered which part you excised . . . all the mainline and morphine lyrics are still there; you took out the verse about the preacher and all the holy holys . . .Maybe it was the mix of drugs and religion that UA most feared, or maybe they just figured the song went on too long for cloth eared DJs . . . And can I have the Hot Rods acetate when you've finished with it?

you know, I listened to the commercial copy and wondered how the hell I could have cut out the last verse without utterly ruining it. It didn't make sense. (I didn't have a DJ copy to refer to). Now I think about it, you must be right...they needed it shorter (for airplay) and the Holy Holy verse had to go.
Thank you for your comment...sometimes I wonder if anyone's reading these things. I wish more people would respond, even if they just want to take issue...I was told the new colour scheme was no good today, so I guess I'll be reverting to an easier to read template.
Um, I'm not quite ready to give up the Hot Rods acetate yet, but I've nearly finished filing my cds so the 12"ers are next. When I find the Hot Rods Fan Club lp, I'll send you mps of each track and, if I have a spare, we can discuss what you might have that I'll want! take care - ht

And even better to hear about specific records that I clearly recall from years before having met you in 1978.

I was on the air at the college radio station when that 3 sided Monty Python album came in and we marveled over it for hours.

thanks, Duane. The thing I remember most about that session (apart from Ray's excellent execution) was how funny Terry Jones was in person. He was naturally hilarious.

Christ on a bike Howard, they say there's a book in everyone but there's a veritable uber library in the portals of your memory.

Apart from the fact this is all priceless stuff that i could gobble up till the cows come home, you write in such a way that it enters my loaf by osmosis. The stories take on their own rythmn like the music they describe.

Fuck i have read that back and i'm sure an entry to pseuds corner in private eye is not beyond me.

Anyway, getting to the chorus i just wanna say I enjoyed every bloody word.

As for the hot rods, i remember a gig in (the red lion?) in hounslow high street, my flippin manor which was akin to royalty setting up a pa in my front room.

Finally,a zero degrees of seperation vibe, the pub was a 100 yards or so from one of our local record shops, where on a regular basis one could spot jonathon king in multicoloured afro wig dropping in with his latest box of singles.

got a funny story about kim fowley in a pub in Chiswick too but another time!

I remember that multicoloured afro wig of JK's. I found him fascinating, mainly because I couldn't believe someone would want that kind of attention ALL THE TIME. He just never slowed down. Thanks for the nice words, I appreciate them very much. I struggle with this stuff and never like what I've written. It takes so long to do, too. I've been struggling with an Ants piece for the last 10 days and I haven't even got to Prince Charming yet! Mainly because - while I'm trying to write it - I'm copying dodgy 45s into mp3s. Got 15 done today (with b-sides) and I'll probably never listen to them again!! Although, maybe I'll put the Nazis' Against Fascism's "Sid Did It" on the radio just to piss off a few people. Do you know that one? ht

I'm writing a book about Bowie from 1970-1971. Bob Hill was very involved. Is he contactable?
Sorry to bother you with this but my searches are going nowhere.

Hi Ivor
Sorry I know he lives in Clethorpes and that's all ..... there is a trident studios Facebook page though and he was mentioned on there sorry for the late reply I only just saw this
Clair