In the early 70s, I used to frequent places like the Roundhouse, the Marquee and the Lyceum. These venues would hire a dj to spin records while audiences would wait for the main attraction. I remember being profoundly affected by certain tracks these guys would play and after a while, seeing Jeff Dexter or Andy Dunkley’s names listed in the ads meant it was worth getting to the show early, as they would often play stuff that you'd never hear anywhere else. Dunkley - or as he's sometimes known, The Human Jukebox - once played 'Only You Know And I Know' and it took me nearly 5 years to discover that it was Dave Mason who’d recorded it. It wasn't until I checked a Dave Mason “best of” test-pressing at Island Records that I recognized that distinctive lick and best of all, I now didn't have to buy it! Andy also 'introduced' me to Tom Rush, The Ventures, Caravan, The Soft Machine and Miles Davis, amongst many others. Andy found himself in New York for a while DJ-ing at all the Irving Plaza shows. He (along with John Stainze, Frank Gallagher, Peter Leak and I) was a founding member of the Curry Club, an every Tuesday night gathering at 6th Street's Good Karma restaurant. The rules were simple. You couldn't be American, female or a div. You had to tell a joke and bring 2 litres of Suntory Japanese beer. First timers had to pick up the bill. 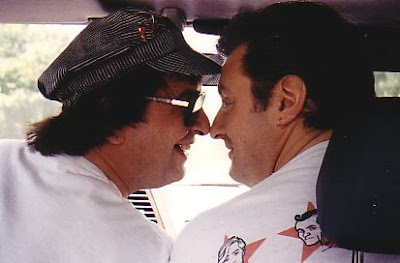 Andy Dunkley, John Stainze
Austin, late 80s
When Jeff Dexter played 'He’s Gonna Step On You Again' by John Kongos at the Roundhouse, he announced that it “sounded like 400 freaks locked in a studio” and I couldn’t wait to get hold of a copy. It turns out, a few weeks later, Gus Dudgeon would produce its follow-up, 'Tokoloshe Man' at Trident Studios and I got to watch that single get mixed. Years later, when Elektra celebrated its 40th anniversary, I invited Happy Mondays to cover 'He’s Gonna Step On You Again'. Kongos had been released on Elektra in the US and we’d asked the current roster to pay tribute to Elektra’s history by covering its 'classics' for a double cd, which ended up being called 'Rubaiyat'. Good idea, BAD title. Because their version turned out so well, Factory Record's Tony Wilson held it back so he could release it as a single in the UK and 'Step On' became their biggest hit. This forced us to find an alternative and in the end, we made-do with a questionable version of 'Tokoloshe Man' instead. 'Step On' was a massive club hit for us (thanks partly to a Brit dj in NYC clubland called DB) and it did well on the alternative charts here, also. To return to Jeff D for a moment, I remember him coming to Trident with his pal and colleague, Ian Samwell, where they produced their latest discovery, America, who subsequently hit it big with 'A Horse With No Name'. In 1958, Ian Samwell had written and played on the excellent 'Move It', originally recorded as a b-side for Cliff Richard's first single, but flipped on Jack Good's advice to become a huge hit and arguably Britain's first, great rock & roll single. 'Sammy' had also produced and written the lyrics to 'Watcha Gonna Do About It', the Small Faces' fantastic debut single ('65), so he's clearly the business, too. When I was doing some research for the 'MC5 * A True Testimonial' film, Jeff was enormously helpful in naming and locating some of the 'players' around the underground scene in the UK when the band played there and recently, he tipped me to Pete Frame's marvelous book about the birth of skiffle and the beginning of the UK rock & roll scene in 50's London, 'The Restless Generation'. I've plugged it before and I'll do it again. It's one of the most enjoyable books - on any subject, including smut - I've ever read.

John Peel would drag some of his collection around the country opening and closing for bands - sometimes he was the main attraction - but his radio shows on (pirate) Radio London and the BBC throughout the years were always essential listening. As an a&r person, I'd use John's show as a resource for new, up-and-coming, bands/artists and would always want the bands I worked with to record 'John Peel Sessions' at the BBC studios in Maida Vale. I had one of those 'pull-over-and-park' moments when I was driving home from Dingwalls one night. He was playing 'O Superman' by Laurie Anderson...something so foreign, so beguiling, so extraordinary that I just had to stop everything and listen, have a bit of a think, you know, take stock.

Fan letters would sometimes arrive at Island Records, mostly for Roxy Music, Bad Company or Bob Marley. The receptionists would open them and we'd have a good laugh at some of the polaroids that were sent to Robert Palmer. In Oct '76, an envelope bearing the logo of an American radio station landed on my desk. It was addressed to Eddie & The Hot Rods but instead of forwarding it to Sheila Martian (their fan club secretary) I opened it. This was the first time anyone from the U.S. had written to the band, (their 3rd release, 'Live At The Marquee' e.p. had just come out in England). At the time, I was very naïve about the States and had no idea how many radio stations there could be in any one town, let alone the country, as we in London only had 2 (the BBC's Radio One and Capital Radio, launched in '73) that were devoted to “pop” music. Naturally, I thought if I sent this dj a few singles, we’d end up gaining some interest for our artists in America, so I sent Kevin Patrick a bunch of 45s and some publicity pics and it wasn’t long before he was sending me all the cool, new US singles (like Little Johnny Jewel by Television and 45s by Blondie, The Ramones, the Talking Heads etc). I'd send him the Sex Pistols, the Stranglers, the Damned, the Buzzcocks, The Jam and all the Island and Stiff records on the days of their release and he'd often be the first DJ in the States to get them on the air. Later I found out his station - WITR - was a college station, but that didn’t matter to me as we were trading 25-count boxes of 45s by this time and significantly improving our collections! Kevin turned out to be a very dear friend and we’ve had many good times together, both professionally and socially. Furthermore, he introduced me to the glory of Suicide - the band - who, if you’re a regular listener, you’ll know is a perpetual staple around these parts. I'm tired of banging on about Suicide only to be met with blank stares and "who?" so pick up the November 08 issue of MOJO for Kris Needs’ brilliant 6-page appreciation to see why they're so important. And watch out for their 6 cd limited edition box set 'Live 1977-1978' coming soon on Blast First Petite (UK). 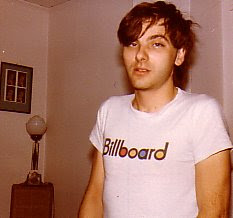 Other djs who had a strong influence on me over the years include Brian Matthew (ITV’s Thank Your Lucky Stars, and the BBC Light Programme’s Saturday Club), Keith Fordyce (Ready Steady Go), Jerry Floyd (The Marquee), Pete Drummond & Kenny Everett (Radio London), Johnnie Walker (Radio Caroline), Emperor Rosko (Radio Caroline, Radio Luxembourg), Stuart Henry (Radio 1), Charlie Gillett (BBC Radio London) Bill Bahlman (Danceteria), Johnny Dynell (Jackie 60), The Purple Knif, The Hound (WFMU) and the great Hugh Nolan, who I’d listen to whilst in bed, at school, on a crummy little crystal set that had a crocodile clip on a cord which you’d attach to an 'earthed' pipe to get a feeble Radio Geronimo signal into one very uncomfortable plastic 'earphone' like deaf people used to use in the 60s. I remember thinking how groovy it was listening to him play ALL 6 sides of the Woodstock soundtrack uninterrupted before it came out. Um, I’m not so sure I’d ever want to do that again, but at the time it seemed pretty radical. It’s where I first heard 'Ohio' by Crosby, Stills, Nash & Young and he’d play the crap out of Balls! Geronimo was my favourite station and their theme song was a neat psychedelic version of 'Amazing Grace' by The Great Awakening. They had a studio in Harley St. but broadcast from Monte Carlo. Go here for more info - Geronimo